The Terracotta Army at the Museum of Far Eastern Antiquities 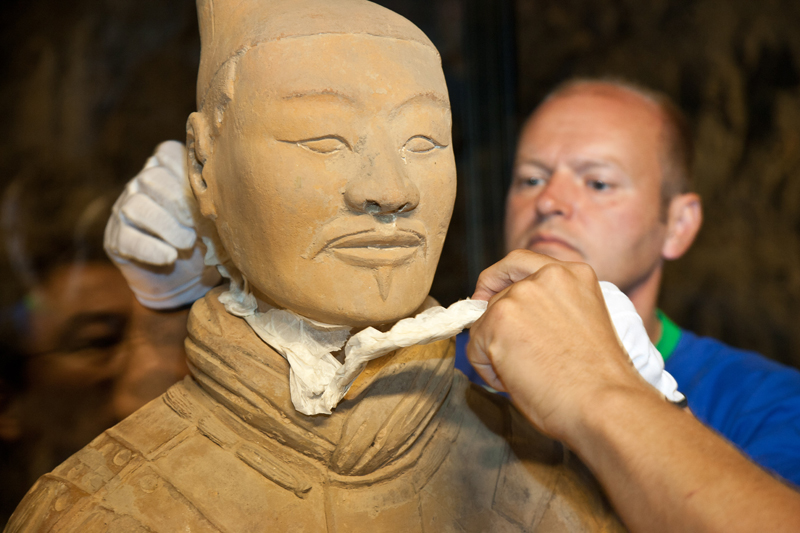 Parts of the world-famous Terracotta Army from China were on display at the Museum of Far Eastern Antiquities in Stockholm throughout 2011. This exhibition was unique as it was displayed in a quite spectacular setting, also included more recent finds from similar burial sites. More than 350 000 visitors saw the exhibition.

MTAB handled the entire transport project, from Xian to Stockholm and back to China. The project also involved packing all the artefacts.

Around 75 cubic metres of unique cultural treasures, weighing about 12 tonnes in total, were transported to Sweden; first by road on four art trucks to Beijing, then by air to Copenhagen, and then on two art trucks with trailers to Stockholm.

This is a fantastic but complex large-scale project, comments Jennifer Nilsson, MTAB’s project manager in the Art & Exhibitions department, who managed the whole shipping process. Our partner in China, shipping company Huaxie, transported the complete exhibition from Xian to Beijing on four trucks, where it was then loaded onto a cargo plane bound for Copenhagen.

In Copenhagen, the artefacts were met by a courier from the Museum of Far Eastern Antiquities, who stayed with them all the way to Stockholm. The exhibition obtained its customs clearance at MTAB’s security warehouse and from there it was driven to the museum over a few days.

– Some of the crates were too big to get into the caverns, so we erected a large marquee outside the entrance for the truck to drive into where we unpacked the artefacts, says Jennifer. We also built a temporary 63-metre transport route, so that the crates would not vibrate as we manoeuvred them into place.

Curators from the Museum of Far Eastern Antiquities were in Xian, and the 316 artefacts displayed were inspected and packed over seven days of intensive work.

Most of the artefacts were packed in separate inner crates which were then placed in larger transport crates. The huge terracotta soldiers and the bronze carriage and four horses took three days to pack. The figures were first placed upright in the specially adapted crates, before being laid down and sealed up with a lid.

MTAB is a logistics partner all the way

With specially designed vehicles and trained personnel, we transport sensitive goods in the Nordic region and around the world.

We ensure that your items reach all the way to use through services such as unpacking, installation and positioning. We also offer removal and recycling of packaging.

Let us solve your logistics challenges

This website uses cookies to improve your experience while you navigate through the website. Out of these, the cookies that are categorized as necessary are stored on your browser as they are essential for the working of basic functionalities of the website. We also use third-party cookies that help us analyze and understand how you use this website. These cookies will be stored in your browser only with your consent. You also have the option to opt-out of these cookies. But opting out of some of these cookies may affect your browsing experience.
Necessary Always Enabled
Necessary cookies are absolutely essential for the website to function properly. These cookies ensure basic functionalities and security features of the website, anonymously.
Analytics
SAVE & ACCEPT